“When I compared star performers with average ones in senior leadership positions, nearly 90% of the difference in their profiles was attributable to emotional intelligence factors rather than cognitive abilities.”
-Daniel Goleman, “What Makes a Leader?”
Harvard Business Review, from research at 200 global companies

“When I compared star performers with average ones in senior leadership positions, nearly 90% of the difference in their profiles was attributable to emotional intelligence factors rather than cognitive abilities.”
-Daniel Goleman, “What Makes a Leader?”
Harvard Business Review, from research at 200 global companies 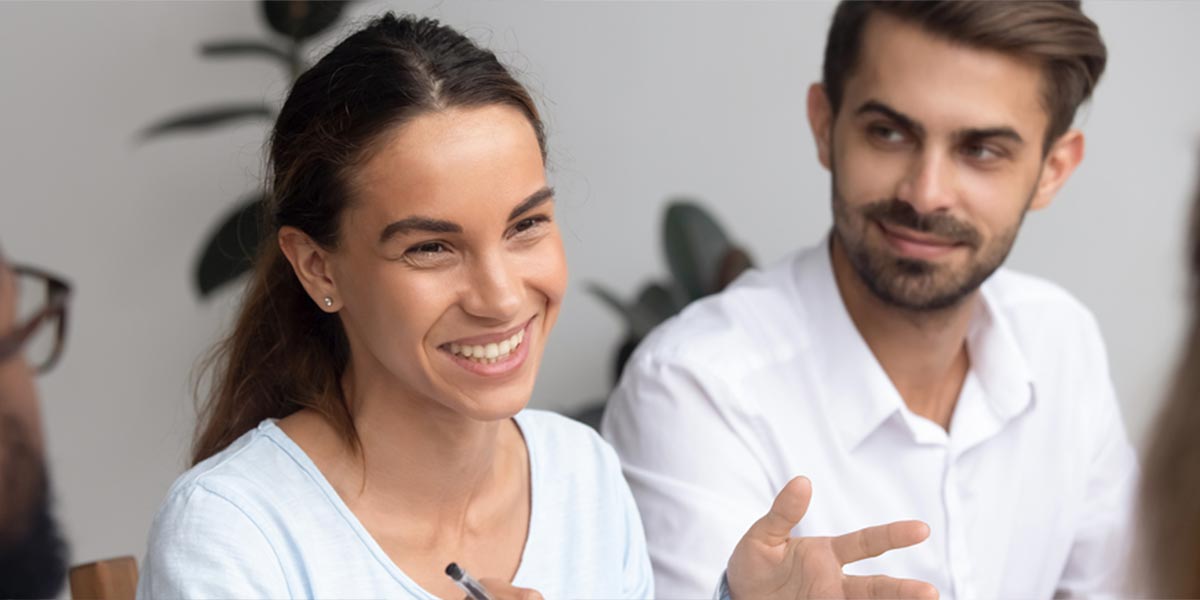 Why do smart people fail?

Have you known of highly competent, experienced, well-educated individuals who fail to reach expected or desired outcomes? Unable to get things done through others? Unable to lead and influence others effectively? Yet they are described as very smart and highly competent.

What is a competency?

A competency is any measurable characteristic of a person that differentiates level of performance in a given job, role, organization, or culture.

We know that there are two types of competence:

New and compelling research in neuroscience provides greater insight into how our brains operate and affect decision making, behavior, relationships with others, and performance. Studies have proven that business performance is critically dependent upon the individual’s ability to successfully manage themselves, their behavior and their relationships. According to research conducted by Hay/McBer, Daniel Goleman, Ph.D. author of “Emotional Intelligence” and “Working With Emotional Intelligence”, Richard Boyatzis, Ph.D. and others:

In a well-known study by Richard Boyatzis at Weatherhead School of Management / Case Western Reserve University, of 2000+ executives, middle managers and supervisors from 12 different organizations, it was found that of the 16 abilities that distinguished stars from average performers, all but 2 were emotional competencies. A larger analysis duplicated these results when the distinctive qualities of star performers were examined across 286 organizations. Two-thirds of the staff was in the US and one-half in 20 other countries. 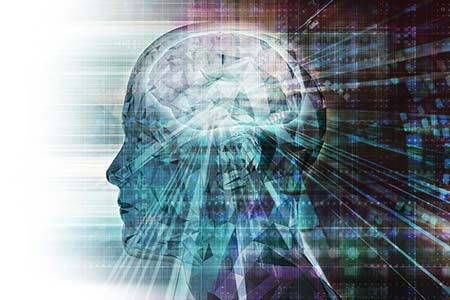 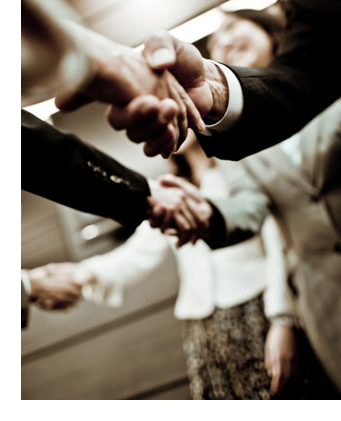 Why is this important for leaders?

Emotionally intelligent leadership delivers results. Research has confirmed a significant performance gap between leaders who display the qualities of emotional intelligence and those who don’t. For success in leadership positions, emotional and social competence accounts for virtually the entire advantage.

Studies of 15 global companies and US Government organizations, reported by best-selling author Daniel Goleman, Ph.D., in Working With Emotional Intelligence and in Harvard Business Review reveal that productivity has been shown to double and even triple with the development of emotional intelligence.

“McClelland (David) found that when senior managers had a critical mass of emotional intelligence capabilities, their divisions outperformed yearly earnings goals by 20%. Division leaders without that critical mass underperformed by almost the same amount.” Daniel Goleman, What Makes A Leader? Harvard Business Review

Leaders influence others in one of two directions: Toward positive actions and behaviors for themselves and the organization’s mission, or, away from actions and behaviors for success. There is no neutral. There is no middle ground. There are differentiating attributes in leaders that consistently result in influencing a positive, high-value direction.

“Moods that start at the top tend to move the fastest because everyone watches the boss. They take their emotional cues from him (or her). Even when the boss isn’t highly visible – for example, the CEO who works behind closed doors on an upper floor – his attitude affects the moods of his direct reports, and a domino effect ripples throughout the company.”

Organizations today are in the grip of continuous change. The new economy has ushered in an era of unprecedented change and transformation. Restructuring, reorganization, re-engineering, increasingly demanding customers, continuous improvement, information overload – uncertainty about the future; we are experiencing the most complex working environment in history. Every day employees face greater pressures and challenges than ever before.

“We’re just beginning to realize how economically valuable emotions are, and it’s clear that they’re largely out of control. Analysts have started to downgrade companies – such as Walmart and the Home Depot – whose cultures, they believe, are eroding, even if their earnings are holding up.”

What’s it costing you?

Ok, we’re not telling you anything new . . . most will say they’ve seen this for themselves in organizations. But perhaps you haven’t considered the latest research on human response to these factors. Research in the field of Neuroscience has revealed that when a person is experiencing stressful emotions such as uncertainty, fear, frustration or anxiety, all neural action (learning, memory, cognition and problem-solving) is adversely affected. Our brains become less efficient in accessing creative or strategic thinking. Emotions can literally create a desynchronization in brain function, affecting performance at all levels.

New traits are needed to thrive and succeed. Competencies manifested in star performers are the competencies of emotional intelligence. The emotional competence framework below presents these competencies as applications of “awareness” and “actions” to oneself and to others.

Science has proven that as pressure and stress increase, our capacity to perform (think rationally and intelligently) is compromised. Core competencies can collapse in a heartbeat.

What is Emotional Intelligence?

Emotional Intelligence is the capacity for recognizing our own feelings and those of others, for motivating ourselves, and for managing emotions effectively in ourselves and in others.

It describes the behaviors that sustain people in challenging roles, or as their careers become more demanding, and it captures the qualities that help people deal effectively with change.

The abbreviations EQ (Emotional Quotient) or EI are often used to refer to Emotional Intelligence. 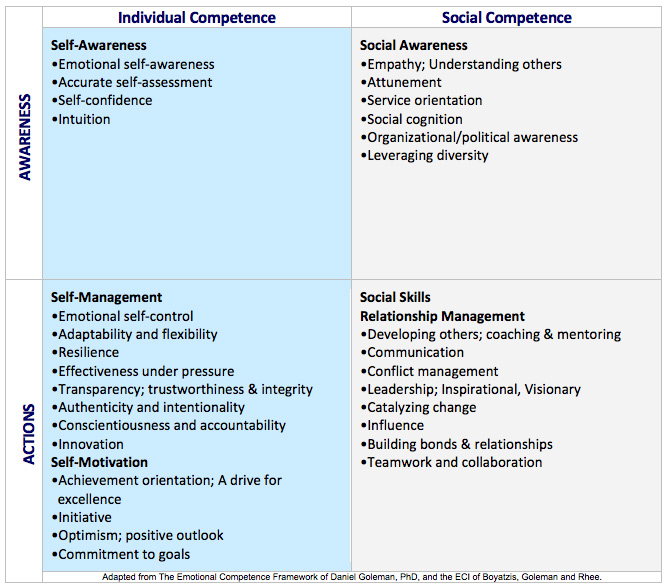 Investing in development that differentiates performance

Our programs teach leaders and teams highly-effective approaches and scientifically-validated tools to improve and sustain high performance . . . . and it can be measured.

If the objective of your development initiative is sustained improvement, skill building in emotional intelligence competency is essential to long-term success. Educating your people ‘about’ emotional intelligence is worthwhile; however, providing a skill development program will deliver lasting results. Building these skills requires a larger time investment than, for example, technical training; however, the return on the investment is high and multiplicative.

“Organizations must refocus their training to include the limbic (emotional) system. They must help people break old behavioral habits and establish new ones. That not only takes much more time than conventional training programs, it also requires an individualized approach. It’s important to emphasize that building one’s emotional intelligence cannot – will not – happen without sincere desire and concerted effort. A brief seminar won’t help. It is much harder to learn to empathize than it is to become adept at regression analysis. But it can be done.”

Why this program is successful for organizations

Our method is focused on creating sustainable results through a process that typically results in an 85% transfer of learning as compared with the usual 15 – 20% achieved in most “soft skills” management training. We utilize a comprehensive approach, for a valuable ROI. Click here to read Client Impact and Testimonials.


First, we work with you to understand your short and long-term objectives

We utilize an individualized approach 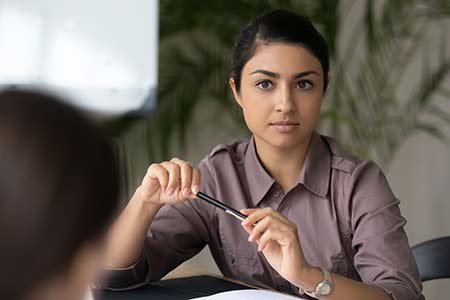 All comprehensive learning and development programs include:

We focus on tools and practical application – beyond theory

Pre and post assessments for the individuals, team,
or organization are selected to measure:

Pre-program participant survey –
A survey questionnaire specifically designed for your organization and/or team is distributed to each participant and other key individuals to gather confidential input. The collective responses are studied by the facilitator and the training format is structured to focus on key issues. Based on indicators in the survey, we provide additional recommendations to your organization.

Post training participant survey –
Approximately 45 days post program, each participant completes a post-program questionnaire consisting of several of the questions asked on the pre-program questionnaire, along with questions about how the tools learned are impacting their day-to-day performance effectiveness. We provide a pre/post comparative and program summary report to your organization. 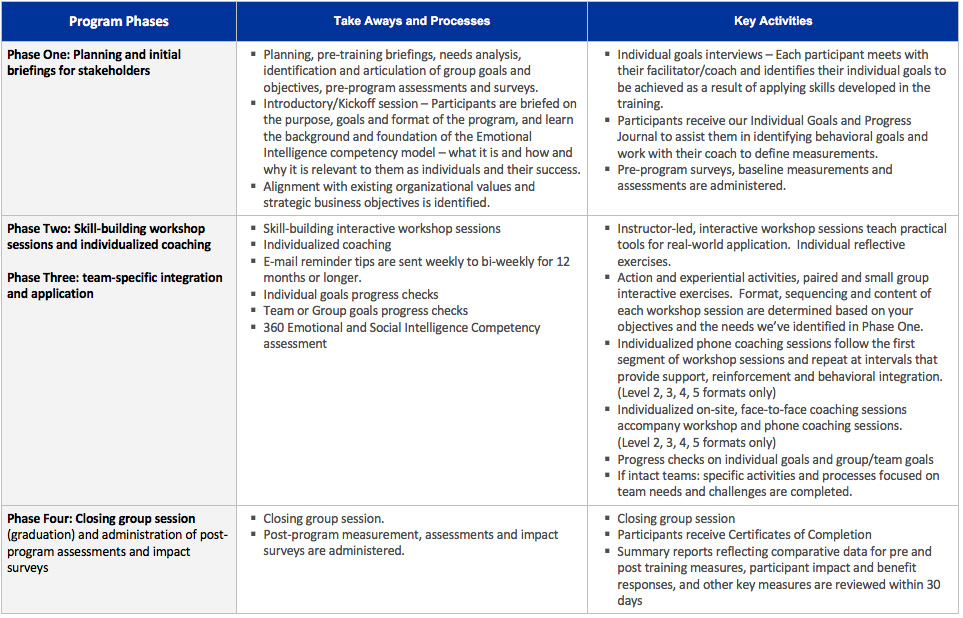 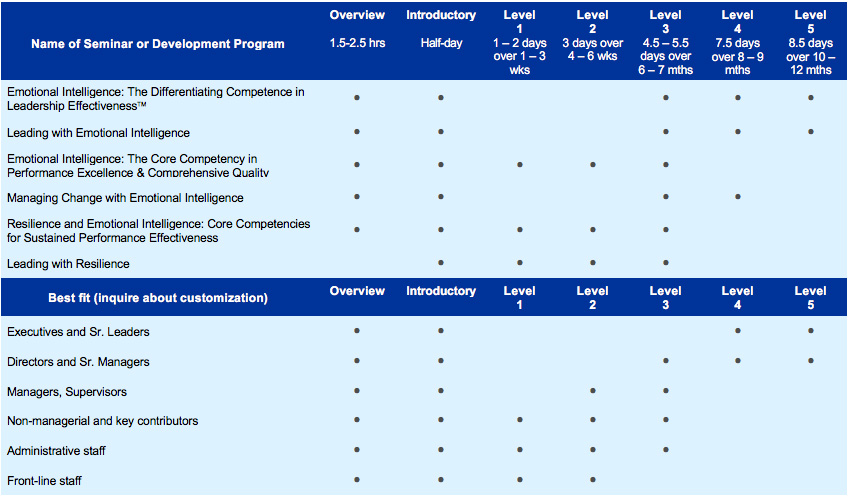 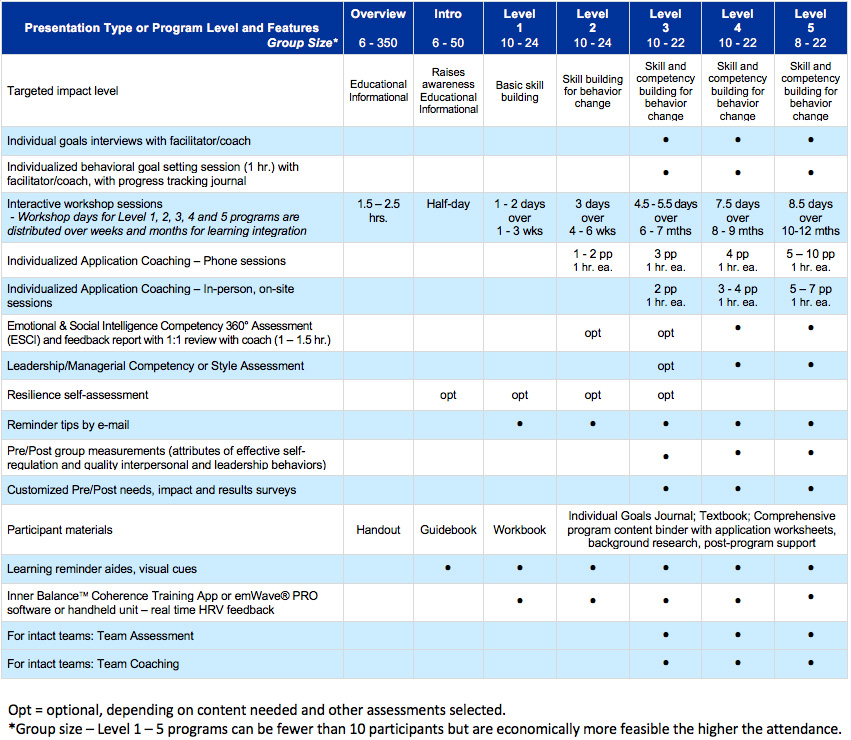 Level One –
First-level skill-building workshops
Length: One to two days consecutive or over one to three weeks. Alternatively 1 full day + 2 half-days.
Impact: Learn and practice 1 – 4 tools toward Level One behavior modification focused on self-awareness, self-regulation, and resiliency.

Building an Emotionally Intelligent Organization or Team
Informing or skill building: Where should you begin?

Does not result in significant, if any, behavior change or measurable performance improvement 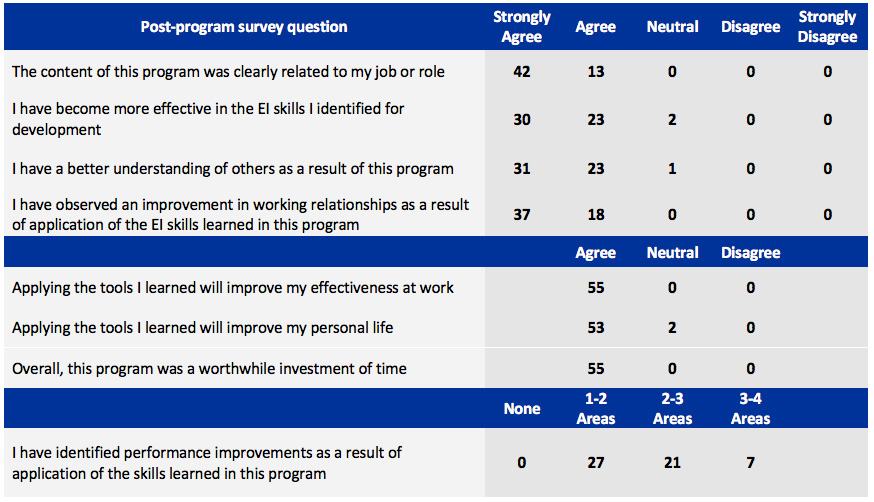 Professional coaching in the development of emotional and social competencies will assist leaders and those identified as high potentials to strengthen and develop core competencies that measurably enhance the performance and expand the organization’s capacity for growth.

As part of our skill-building learning programs for organizations: Coaching is a fundamental element of the learning process in our Level 2, 3, 4 and 5 programs. Participants meet individually with the facilitator in person and have telephone coaching sessions are scheduled intervals that support the workshop learning sessions.

Individual coaching for development of emotional and social competencies is available to leaders, key contributors and professionals seeking to learn how to become more effective in their self-leadership and relationships with others.